Neil Gaiman, The Ocean at the End of the Lane

So yesterday, @GenreADay reminded all of us that progressive was once upon a thing:

And with that one tweet, away went a good chunk of the evening's productivity.

They didn't consume me the way they did some friends, but Marillion was a minor obsession for my entire life as a teenager. I had all the LP's from the years before Fish left the band, including some picture discs (like for Script for a Jester's Tear, a title to cringe at if ever there was one), 12-inch LP singles, even some bootleg concert recordings, but Fish's departure wasn't some sort of trigger to break my Marillion habit. The songs just weren't connecting in the same way anymore. They had never been about my own life, a small BC logging town having little to do with early 80s British prog rock, and I got that my time at an English-style boarding school didn't qualify me to feel like a Marillion character. By Clutching at Straws, it had become obvious, and they were mostly dead to me.

It's embarrassing, now, listening for example to Fish's keening laments in "Kayleigh" ("Kayleigh, I just want to say I'm sorry, / But Kayleigh, I'm too scared to pick up the phone") or the snarling venom of "Forgotten Sons" ("Minister, minister, care for your children -- order them not into damnation / To eliminate those who would trespass against you!"), remembering how strongly I felt the lyrics even though at the time, I was an 14-year-old afraid of girls and unkissed, unexposed to even a hint of genuine political action, and yet I can air-play every instrument for every one of those songs. Badly but emphatically and in private, just how one ought to play air guitar.

Which brings me, obviously, to Neil Gaiman's The Ocean at the End of the Lane, this month's reading for the book club.

I'm leery of giving too much away from this novel, because if you're not going to like this book, it's best if I don't do anything that might persuade you to give it a a try, and if you're the kind of reader who might fall in love with it, then your pleasure might be a little fragile. Even at 170 pages, it's more of a novella than a novel, and Gaiman develops and pursues a very narrow thread here. I'm not touching the book's final third, I should say, even though there's so very much to talk about in terms of who the narrator turns out to have become, because you need to come to this novel as open as possible.

Really, The Ocean at the End of the Lane is a novel of childhood, a fantasy novel that should also be understood as a realist dispatch from inside the very different reality that children occupy, as well as a reflection on the years afterward. Gaiman's epigraph from Maurice Sendak shouldn't be overlooked as merely a stick-tap to the author of Where the Wild Things Are, though it's that as well, even if you appreciated the movie as much as I did, loved also the Dave Eggers novel:


"I remember my own childhood vividly…. I knew terrible things. But I knew I mustn't let adults know I knew. It would scare them." 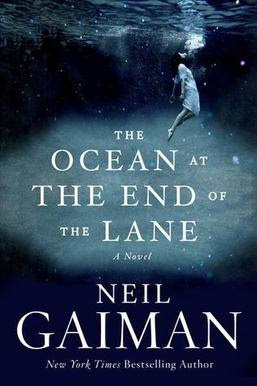 The narrator, an unnamed middle-aged man reflecting on his childhood while on the lam from his father's funeral, is Gaiman himself, is Gaiman's aging fanboys, is every fantasy narrator. In the successive generations of Hempstock women (hemp as pot-style expansion of the mind?) that his narrator encounters to such transformative effect, Gaiman recalls all sorts of magic female-led or female-centric communities; the villain and/or antagonist (also a woman, as maybe she had to be…) echoes numerous nightmare scenes in her shifted shapes. I don't think Gaiman's stealing anything unduly, but I don't spend all that much time with fantasy, so I'm not the best judge. My sense, though, is that everything's invigorated here, and that originality would be unhelpful anyway.

And so it was helpful to be pushed to reflect again, for the first time in many years, on how important, how overwhelmingly important, the 1980s version of Marillion was to me at the time, in spite of its bombast and its utter irrelevance to my actual life, because that's what my childhood youth felt like. All our childhoods feel like that, and it's why our departures from childhood have to be so absolute, and why we get so twitchy about adults who play video games or the like: leave part of it behind just once, and it's all gone, all lost.

And so the shouting responses to somewhat negative reviews of the book make great sense to me, even though I'm absolutely on board with the mixed reviews. I know that the terms make no sense, but it's my blog, so I'm using them: the more adult you get about The Ocean at the End of the Lane, by which I mean that if you take a critically remote stance, the further you get from your childhood brain, and the paler the novel becomes. Magic disappears when you get rational, and while that's precisely how I approach the atheism/religion question, I've got vast amounts of time for imaginary magic in fiction.

So … maybe don't think too hard about The Ocean at the End of the Lane? Manage that trick, and it'll turn out to be magical after all, at least for a little while. Distrust the novel, and the glass will fall away, unrecoverably turning back into sand.

Up to you to say whether that makes it a novel worth tracking down, I should think. But there are some really smart reviews out there, should you want to read one.
Email Post
Labels: book club fantasy international review speculative fiction