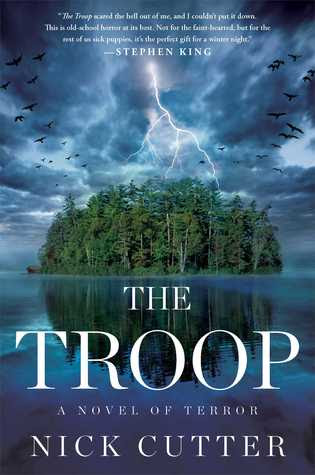 I don't read a lot of horror, and very little of what I watch has anything to do with horror. While I was impressed with the pseudonymous Nick Cutter's The Troop, it didn't do anything to shift me toward spending a second more with horror than I need to.

Don't get me wrong: Rob Wiersema remains a terrific reviewer, and his admiration for this book doesn't make me doubt him. And while I thought "Nick Cutter" comes off as more than a little impressed with his own cleverness during interviews wherein he considers allegations about his identity, my eye-rolling won't be held against him.

But really … I get that there are genres, and that each genre has its fans, but this one? Disgusting, but not in a good way; descriptive, though not in a way I trusted. If this is the good stuff, then next time I stray from my usual, I'll probably skip horror and go for romance.

In sum: yeah, you're right, I gather that it's pretty great. Just not for me.
Email Post
Labels: canadian environment fiction review