In the current contest to see whether humanity will make the necessary effort to avoid cataclysmic spasms of extinction and refugee, it's easy to see that Bill McKibben is one of the hardest-working characters in climate-change show business. He has been thinking about these issues for years, of course, since before his 1989 book The End of Nature, but it's a huge change for a writer to move from the realm of words into full-on activism, and that's the trajectory of McKibben's career. We're fortunate, then, that McKibben has now written about how he came to make this transition, and in a really enjoyable book, too.

Oil and Honey: The Education of an Unlikely Activist does savour a bit of the aw-shucks and it's-only-me, but it's not false modesty, or it doesn't read that way. Instead, it feels (to me, anyway) like the genuine story of how McKibben came to understand that people had accepted him as a leader before he recognized that they saw him that way. He knew he was becoming an activist, and abandoning his writing in order to do so, but since he didn't think this entitled him to a leadership role, he kept looking elsewhere for authority and for approval of assorted actions (marches, protests, petitions, and so on). 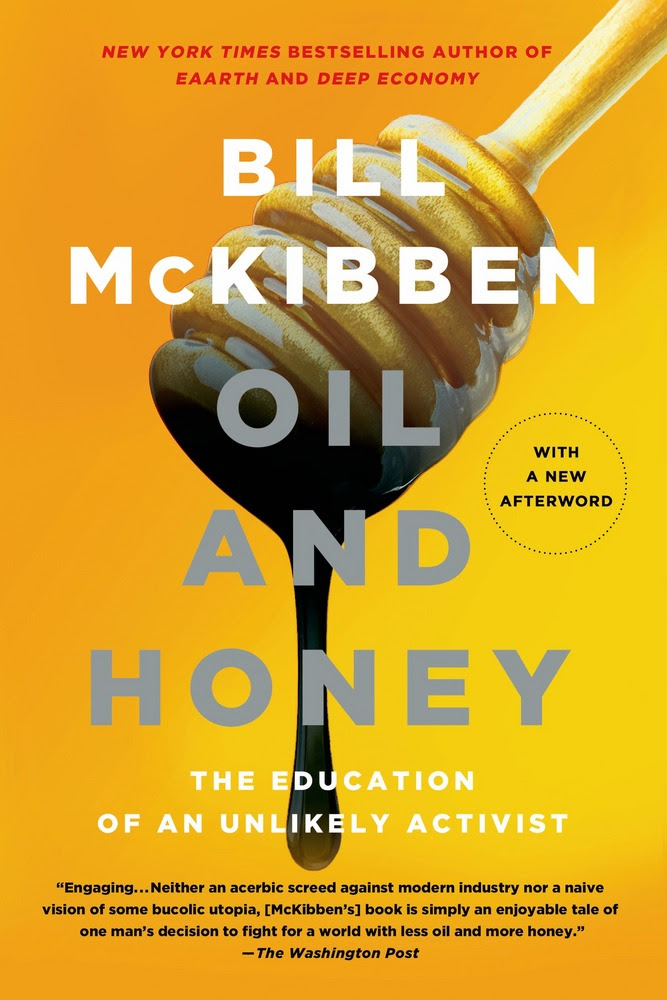 And then we were all looking to him, and he got to work.

But this memoir, of a short period in McKibben's life, isn't about the activist mission, at least not directly. While it's certainly about his work in opposition to the oil industry and the American petrostate apparatus, it's just as much about the honey side of the book's title pairing. See, McKibben has put his money where his mouth was on locavorism and community agriculture. He bought a farm, and immediately deeded a life interest to a bee-keeper he respected but who was having difficulty getting out of the difficult situation of renting land rather than owning. Recently savaged by 76 wasp stings in a single attack, McKibben nonetheless charges ahead into collaboration with bees -- with the bee-keeper, obviously, but in fact he has begun working directly with the bees, with the suit and everything.

It's not an especially subtle book, nor even a particularly artful one, and yet I found it deeply, deeply engaging. Me, I'm teaching environmental humanities courses that focus on the reading experience, constantly aware that this is an awfully long way from direct action. There's something in McKibben's apparent transparency in Oil and Honey, both the plain-spoken appeals and the eschewing of manipulative narrative structures, that cheers me enormously.

Plus McKibben's contesting the Keystone XL pipeline, along with anthropogenic climate change generally, and he's not sure what'll happen. I'm opposed to the Enbridge pipeline from the tar sands to the BC coast, and I'm sure that this pipeline will not happen. I need his doubt, to feed my will.
Email Post
Labels: american environment nonfiction review