I'm always keen to read the books produced out of the CBC's Massey lecture series: not that I'm very good at rushing out to buy them, but I've read about a third of them over the years, and I've commented on a few of them here at Book Addiction HQ. They're consistently thoughtful, provoking examples of committed writing, skewing sometimes toward the academic, with their authors standing publicly for something and expressing their own perspectives on the world in a really appealing hybrid mode that, while being a heavily edited and expanded version of the lectures, still (usually) emphasizes their speech rhythms. 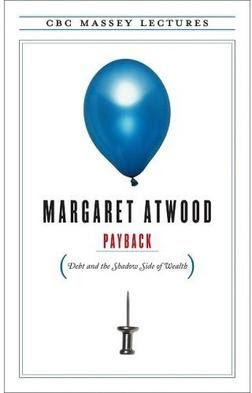 Margaret Atwood's 2008 Payback: Debt and the Shadow Side of Wealth precisely fits this description, and if that's good for you, then you'll appreciate her efforts in the volume. Mostly she's unpacking the history of ideas of debt, focusing on concepts like revenge and honour and non-monetary debts, so if you're expecting a discussion of, say, the 2008 financial crisis, you're out of luck. (And that's a real shame, because it would've been great to hear her reflections on that, while events unfolded during her lecture series!)

For me, the most interesting sections were speculative rather than historical. Atwood's thoughts on what the world would be like now if the United States had responded differently to 9/11, well, those are worth the price of admission all on their own, even if it's only a couple of pages long. Her lengthy narrative of a 21st-century Scrooge will get your eyes rolling on occasion, but she's in on the joke, and it's intentionally cartoonish in the same way that Dickens' Christmas Carol can be at times: but it also offers some incisive remarks on the alternative futures that we're refusing to choose between. The ideas of her closing chapter connect neatly with those she dramatized in her MaddAddam trilogy, with social decay and environmental collapse being integrally related to each other in a catastrophic feedback loop.

Still, I read this book with the spectre of my book club on my shoulder: we've not had a lot of luck with nonfiction, since an unfortunate year where we tried to be Serious Gentlemen and inflicted a lot of Very Bad News on ourselves, and I'm gun-shy as well about anything that sounds the least bit academic. Worrying, but we'll see on September 30th!

Plus it became a movie, which I learned while standing in a Victoria video-rental shop (remember those?) telling a clerk how much I enjoyed Manufactured Landscapes, only to have the mother of its filmmaker Jennifer Baichwal chime in and say that her next project was in pursuit of Atwood's book. The world being, of course, a very small place to house seven billion people.
Email Post
Labels: book club canadian CBC massey environment nonfiction review