Carol Shaben, Into the Abyss

I distrust anything that strikes me as an easy read: reading has to savour of Buckley's Mixture ("It tastes awful -- but it works!"). Even if there's obviously some very good writing, I don't like being comfortable when I read. 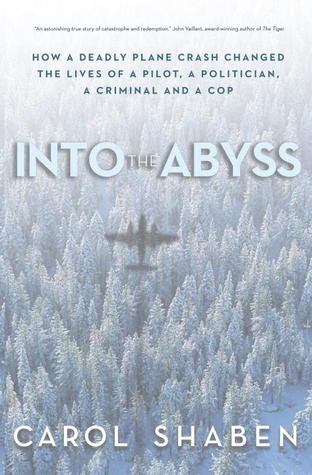 All of which is meant to explain why it's a genuine complaint, if a stupid one, that Carol Shaben's Into the Abyss is a remarkably fast-paced book-length work of journalism, smart and tough and a very pleasant companion through the surprisingly few hours I spent with its nearly 300 pages.

The subtitle of Shaben's book, if you haven't seen it yet, is How a Deadly Plane Crash Changed the Lives of a Pilot, a Politician, a Criminal, and a Cop, and that's a very accurate description of the book and its contents. Larry Shaben, then a minister in the Alberta provincial government; pilot Erik Vogel; RCMP officer Scott Deschamps; and regularly convicted drifter plus small-time criminal Paul Archambault spend a frigid night snowbound in northern Alberta, after a plane crash kills the other six occupants of the plane (including Grant Notley, the father of Alberta's current premier, Rachel Notley). Shaben covers this night with intimate detail, but the real story of the book is what happens over the succeeding decades. It's a fresh story, impressively told, about interesting characters facing looming death and complicated fates.

And I wanted to enjoy the book more than I did. English professors shouldn't be allowed to read for pleasure.

When a reviewer wants to protect a book's important narrative details, the normal approach is to talk about style, but in this case the characters' outcomes are so large a part of how I respond to the book's style. At bottom, I wanted the journalism to drag a bit, so that I could feel more of how these characters were experiencing both the immediate aftermath of the crash and the variously long years remaining to each of them afterwards. Long-form journalism often plays with pacing, forcing its readers to speed up and slow down, introducing phantasms of artsy-ness into the fairly business-like trajectory of its story arcs and sentence structures, but Shaben doesn't do very much of that here. There's always the option to focus on the writer's own personality, shifting toward the memoir, but Shaben doesn't do that, either, even though she's the daughter of one of the survivors.

If you're a completist interested in reading all possible books about disasters and crashes, this is an excellent one to add to your roster. Ditto for people interested in the back story behind Rachel Notley, and the mindset of those sometimes described as "career criminals." And ditto, too, for readers who appreciate it when a nonfiction story becomes a page-turner. All that's here in spades.

I just wanted more mourning, more anxiety, more emotion. Page-turning isn't even a beginning for me, because it doesn't count as something worth praising. If it works for you, though, well this book might be a great choice for you.

(Need more? There are spoilers a-plenty in the Toronto Star's review; the National Post has an unusually sensible negative review; and Shaben herself was on NPR to talk up the book when it came out.)
Email Post
Labels: book club canadian nonfiction review