What does it mean     mean
to be mean

I blame you
Maleea Acker.


Sarah de Leeuw's Skeena, two copies of which I purchased at her recent joint launch at Russell Books with Theresa Kishkan (Patrin) and John Pass (Forecast), really is entrancing. Read it with the sounds in mind, maybe even in air, letting the echoes and cracks have space to breathe, and twenty pages in, you'll be in danger of forgetting your own voice.

(An explanatory digression: why blame Maleea Acker, who moderated de Leeuw's reading the next day with Alejandro Frid, for the unpardonable opening to this review? Over a Hoyne's Dark Matter after the launch, sitting with John Pass who was drinking the same, she joshed me that every English prof's really a writer, whatever my protestations, and she's right. I'm comfortable being a reader rather than a writer, but Skeena had an effect on me that isn't down to the sweet rumblings of the man snoring behind me on AC1832, bound for Las Vegas on my first trip there, which is where I'm reading Skeena for the first time, nor the female strangers on either side reading Jonathan Franzen (Purity) and Harper Lee (Go Set a Watchman). Maleea reminded me, unintentionally I'm sure, that writing's just flat-out allowed if you feel like writing, and I'm grateful. But you may not be.)

At Russell's, and presumably at other readings, de Leeuw wryly noted the arrogance it takes to write as if your voice is a river's. Respectful neocolonial settler that I am, this speaking-for both worries and pleases me, and Skeena echoes with the traces of a thoughtful, cautious, engaged mode of settler being. I've been arguing in my courses and scholarship for some time that the impossible goal of an ethical settler-colonial occupancy is the best that people like me can aim at, and in Skeena I recognize just that sort of ethic.

From "Wet'sinkwha," for example, a poem teaching and remarking on the river of that name whose identity has been graffitied over as the Bulkley: 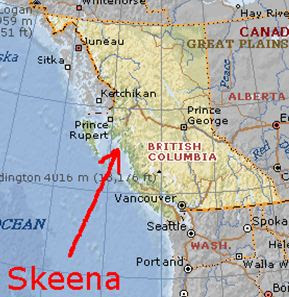 The river's name; the reduction of women and their labour to only their hands; the alliteration and assonance within each half-line of the first couplet above, except for the "hands" and "flanks" in the first line's two halves, binding these two casualties of capitalism; the diminution over time of nature's potence exemplified in the seals, whose sustenance declines from taking to barking to begging, and from salmon itself to the mere slurry of slime and scales and blood from the above-sea floor of the North Pacific Canning Company and the Anglo-British Columbia Packing Company: this is poetry on which to rebuild a nation, aware this time that self-determination is all, that this nation must follow and honour the nations and nature already here, always already here.

But enough of the rhapsodic.

I loved Skeena, and I barely know that part of BC. If you're familiar with this patchwork of nations along the Skeena, or with any of the nations west of the Rockies, or frankly with any of the once and future world, so will you.
Email Post
Labels: british columbia canadian environment poetry review west coast