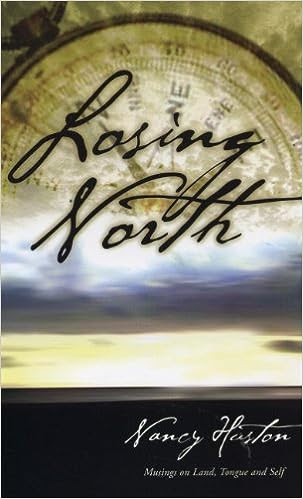 I've not read much by Nancy Huston: as I did with many of my friends from the 1990s, I gave up Huston in the divorce that capped that decade. My then-partner was passionate about Huston, especially the wonderful 1993 novel Plainsong, and if she'd seen it, she just might have burned Publisher's Weekly to the ground for their snide commentary on the occasion of Plainsong's American publication ("a narrator fond of the em-dash, intermittently partial to the comma and dismissive of quotation marks").

As with many things lost well before one hits middle age, I'm realizing that if I'd just made more of an effort, I could have been enjoying Nancy Huston's books for years now. Recently I stumbled across her brief 1999 volume of linked essays Losing North: Musings on Land, Tongue and Self. Born in Canada, moving to the United States with her family as a teenager, Huston wrote her Master's thesis in France on linguistic taboo, under the supervision of Roland Barthes, no less. Taken together, this almost perfectly qualifies Huston to ponder what it means to live transnationally, translingually, without a place of one's own, as a writer insistent on the peculiarities and particularities of both language and place.

One's claim to place, if it's an individual claim based on one's own connections to place, can only ever be ephemeral; it ends ultimately with death, of course, but it fades long before that with the erosion of memory, as well as (more crucially) the lack of shared meaning. For Huston, the expatriate has not two places, not two or more languages and communities and families, but an absolute absence:


A person who decides, voluntarily, as an adult, unconstrained by outside circumstances, to leave her native land and adopt a hitherto unfamiliar language and culture, has to face the fact that for the rest of her life she will be involved in theatre, imitation, make-believe. (p.19)

The phrasing throughout the book is full of doubt, though controlled and rendered (relatively) safe as a stylistic tic that makes it sound as if she merely prefers parallel phrases, clauses, near-synonyms. Huston lives and has lived a rich life, so this may all feel like first world problems, but that's not to say they're not genuine problems. The more mobility the average person has, assuming that the quasi-Singularity of synchronous cross-world intimacy isn't approaching on the next Elon Musk-mobile, the more common this situation will be, and the more problematic.

Assuming it's a problem, of course, and I do assume that. I'm persuaded by Huston's claims that she has a hard time understanding where she lives, or understanding how one understands where one's life occurs, in part because even though I've lived in British Columbia for almost my entire life, I'm still at times unsure how to articulate that. I'm thinking a lot these days about on Lee Maracle's Ravensong, which features some very careful reflection about the difference between individualist settler experience of place and a more collectivist Indigenous experience. The prompt in Ravensong is a person's death: when someone dies in town, the settlers experience it as a darned shame, after which life goes on uninterrupted, but when someone dies in the narrator's village, it's a crisis, an existential threat to the community's viability.

Not that Huston goes there: she's French in how she's thinking through this particular issue, far from the ongoing colonial and colonist interface that's the reality of life in British Columbia at this point. It's a helpful book nonetheless, though, and for readers not trying to figure their way through the legacies of colonialism, Huston's a wonderful prose stylist, and you won't mind missing that.
Email Post
Labels: canadian international nonfiction review