We're all our own worst enemies, aren't we?

Though addictions pursue their own logic, we are their vectors. Procrastination, for most writers. Everything internetted. Running, once your occasionally sore knee turns out to need replacement (again).

Self-harm is a temptation for most people, I'd say, though of course immediately I stress that self-harm is radically different from the above list of casually or unconsciously self-destructive behaviour. The more you read about self-harm, too, the more you realize that you can't get far without pondering the felt experiences and the short-term outcomes of various approaches, be they anorexia or cutting or drug overdoses or or or....

And it's all horrible, and if you've stopped by here because maybe this is your thing, or maybe it could be, you're not sure, please don't, but also please feel free to get in touch, and there are less self-annihilating ways to generate a sense of relief or release, and do anything you possibly can to evade self-harm.

If you wanted to read something for free on this area, maybe try Chris Millard's 2015 book A History of Self-Harm in Britain: A Genealogy of Cutting and Overdosing (legit source here). Something more relevant to the point of this post would be Sarah Chaney's Psyche on the Skin: A History of Self-Harm (interview with Chaney here). Or there's always something bloggy and well-intentioned from a therapist, if that's more your style, but I worry about the unintended consequences of correctly naturalizing ("animals do it too!") an activity with the inherently cataclysmic potential of deliberate self-harm. 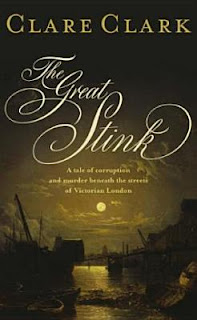 Clare Clark's The Great Stink somehow makes the self-harm of one of her protagonists (not a spoiler, once you've made it to page 10 out of 356, in my QPD/Viking edition) into a plot detail. It defines him, to his readers and to himself but not to everyone from whom he keeps it a secret, but in my view it's not in fact critical to the forwarding and development of his narrative.

There's a pretty terrific novel here, if we exclude William May's self-harm. Unlike some readers, I wasn't the least bit put off by the wonderfully redolent descriptions of shit-filled sewers, by the meticulously bloody flurries of dogs set among rats for men to bet on, or by the lethally oppressive social atmosphere within which every character in the novel is forced to exist. Life is shit, whatever, write me a book and I'll give it a go.

I'd be totally here for a subterranean infrastructure historical novel (shut up, I'm NOT a nerd, shut UP), especially one with critical intersections between layers of bureaucracy (SHUT UP, am NOT), and even more so when the environmental and the human are inextricably tangled, plus many of the characters read so well.

But the longer I spent with William May, the more it reminded me of difficult, self-destructive times that need to stay behind me--that I need to keep behind me, and that I have to work to keep there--and the less certain I felt that Clare Clark was playing fair with her readers. This is on me, of course, not her. It's just a book, after all, if an English professor is allowed ever to say such a thing, and anyway I don't believe "just a book" tripe. If you've read The Great Stink, tell me in the comments that I'm wrong, but I'm not.

If you want an actual review of the novel, by an actual reviewer, try Susann Cokal in the New York Times. I couldn't write a review this time around. Unclear to me what that means to you, as a potential reader of this novel, but I worry about you. About all of us.
Email Post
Labels: book club fiction international review