Brian Fawcett, The Last of the Lumbermen

It's not about lumbermen, or lumber, or trees. You people don't care about that, none of you really cares about trees, not even you huggers thereof, but if this wasn't a Brian Fawcett novel, I would've been seriously cranky about the damnably non-lumber content of his 2013 The Last of the Lumbermen.

It's mostly a hockey novel, so in that sense it follows on from Fawcett's 1982 My Career with the Leafs & Other Stories, a book I happen to genuinely admire. Hockey is of course Canada's thing, and absolutely the role of hockey in the novel is one reason that Richard Wagamese's Indian Horse is so amazing, but.... 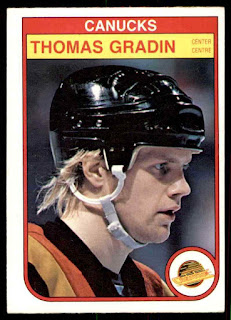 Now, I can trace the lineage of my hockey fandom to Pit Martin's brief tenure with the Vancouver Canucks (1977-79: I made a wee placard to carry around the house whenever he scored a goal), a time when I was so fanatical that my parents bought me my own radio just so I could listen to games in my room. In 1982/83, still in elementary school, I made a concerted effort to win the entire O-Pee-Chee set of NHL cards, and ended up missing only about a dozen. (Every one of them was dented in the corners, mind you, and eventually I gave them away to adorable Tina Jackson's less adorable little brother.) It wasn't until my 30s that I started losing track of who the Canucks were drafting, trading for or away, or over-paying.

Anyway. I'm old, and increasingly grumpy with my harrumphs and cries of "whippersnapper," and by god I'd rather read about lumbermen than about the Lumbermen hockey team. Fawcett's first-chapter philosophy of hockey rings true to me, so I'll grant the conceit, but I'm still not watching a single game featuring the next batch of rental whippersnapper Canucks.

Where was I? Right: confessing that I'd really enjoyed Last of the Lumbermen. Its protagonist, Andy Bathgate (no, not THAT Andy Bathgate, as our hero explains a few times), who we learn in just the second chapter had lived for a time as Billy Menzies, is complicated and wounded and so naively self-confident that it's a treat to keep learning with him just how wrong he's been about the life that he's thought he's been paying close attention to. His beloved Esther is a treat, though perhaps a little stereotypical, while his linemates and co-conspirators Gord and Jack deserve their own book but don't push Andy out of the novel's limelight. This core group of characters is terrific company.

Esther's son Wendel ... well, I don't know Fawcett, though I'd tried to get him to attend a conference I organized in 2009, but if I did know him, I'd suspect that he'd  been making fun of me. Conversations between Wendel and Andy are often  INCREDIBLY talky philosophizing about forestry. Is there another reader of Canadian fiction who'd think, sure, yeah, at this point of the novel we SHOULD be imagining feasibility studies for a community scaling yard, since the last chapter focused on salvage cutting after a spruce budworm infestation? No? Only me, then?

And so I have no idea who else will appreciate this novel. Certainly I don't have many people in my own circles who'd really get it, but I feel like I do. Hockey be damned: it's a novel of small-town BC with forestry and a small world and getting by on its mind, and I'm always going to be here for that kind of thing. A good addition to my Fawcett library!
Email Post
Labels: british columbia canadian environment fiction review west coast