Walking with Plato is a baffling book. I suspect that I'm not the only person who felt tricked into reading the thing, found it utterly deficient, and yet enjoyed it immensely. 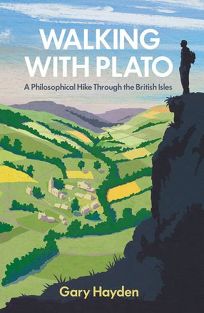 Basically, the conceit is that we should all be so fortunate as to walk from the northern tip of Great Britain to the southern tip, from John o'Groats to Land's End. One reason that undertaking this task would make one so fortunate is that it'd present a rare chance to philosophize, over an extended period, with the landscape answering the mind and the world wide enough to build within it a home for the best of our collective thinking, and whatnot. Another, perhaps more obvious, is the chance to walk through historic England and Scotland, plus the contemporary version of same, hence making the walk both educational and forward-looking.

But goddamn Gary Hayden doesn't give us a single of those potential books, in Walking with Plato: A Philosophical Hike Through the British Isles.

He's no philosopher, and doesn't do philosophy in a professional sense. He's not a naturalist, and his descriptive range fails to get beyond something like "pretty sort of bird." Because he never meant to write a book about the experience, he worked from no detailed notes, few photographs, hazily recalled maps incompletely recovered from his smartphone, and two-sentence daily updates he posted to Facebook. Or as he confesses:


It strikes me here--and not for the first time--what a poor hand I am at this travel-writing lark. I have no eye, or ear, or heart for detail. My descriptions are always vague. (p155)

Or more materially, you strike occasionally upon sentences like this: "Somewhere along the route, we stopped at a pub" (p177).

And yet, and yet.

And yet I really, really enjoyed my time with Gary Hayden and Wendy, his oft-cited wife who's never described and whose inner life never makes an appearance in these pages. I learned almost nothing about England or Scotland, beyond the names of places that Hayden generally and maddeningly declines to describe: "I don't recall the sixteen-mile walk from Linlithgow to Kirknewton. I imagine we took an indirect along the towpath of the Union Canal.... But it's possible that we took some other route" (p.85).

My guess is that if you can identify enough with Hayden, a middle-aged thinker-ish chap who's less physically ept than he'd like to be and has trouble remembering things both important and relatively insignificant, then you feel like this book might also have been yours if you'd been fortunate enough to walk in his stead.

As the kids say (or said, briefly, on some social media platform from which surely they've by now decamped): it me.

It's a calm, pensive, engaging book, and there's room on everyone's shelf and in everyone's mind for more of that.
Email Post
Labels: environment nonfiction review