Curry is the perfect food, without question. I always screw up the cooking of it, at least a little bit, and I can't handle spicy heat (no matter the national origin), but it's incredible even when it's not quite right. The aromatics, the creaminess, the competing textures: honestly, it's the perfect food. 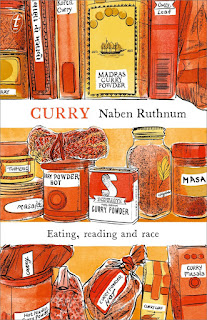 Curry, Naben Ruthnum's slim volume from Coach House Books, with its tripartite subtitle Eating, Reading, and Race, has a similarly refined messy balance among its ingredients. It's unabashedly personal, this theoretically informed pondering of food as ideology and family bond, this eaterly wander through South Asian literature, this readerly plateful of innumerable curries, and it's a joy.

The first chapter, "Eating," is about the food, the ingredients, the methods, and the stories to be told about curry and/as food--chow mein in Calcutta, goddamn turmeric lattes, and Indian cookbooks. The second, "Reading," is about the books that tell those stories, the books that use the stories as excuses, and the books whose relationships with the stories are more complicated than that--shredding Eat, Pray, Love in the process, among discussions of other novels (nonfiction and otherwise). The third, "Race," builds on the first two to speculate on how food and story influence conceptions of race--as well as to nerd out about Harold & Kumar Go to White Palace and Bend It Like Beckham.

Each of these could have grown into its own book, could have turned into something else, but the  "Coda" clarifies (if the stray remarks throughout weren't clue enough) that Ruthnum's on the way to somewhere else. He grew up a kid from Kelowna whose family roots were and are Mauritian, and he's a writer. He doesn't write currybooks, but curry's part of who he is, and he's come to realize that currybooks aren't simply currybooks anyway. He's also Nathan Ripley, author of the thriller Find You in the Dark, and Curry is an even more complicated tiny book than these too-brief comments indicate.

To close, let's be clear about authority here. I'm a reader and a casual eater, not a chef and certainly no curry expert, nor even a devotee of the currybooks that Naben Ruthnum writes about so persuasively. Shalini Kunahlan, marketing manager for the book's Australian publisher, translated one recipe into something that looks pretty delicious, but I'm no judge of the notes toward recipes in this book. I liked the reviews by Manisha Aggarwal-Schifellite in the Globe & Mail, by Kim Kelly in Electric Literature (complete with interview), and especially by Sonia Nair in The Lifted Brow, but I don't read much South Asian literature.

Here's an excerpt from Ruthnum's book in The Paris Review.

God, I'm hungry. I loved this book, and so will you.
Email Post
Labels: canadian international nonfiction review