Richard F. Thomas opted not to put a subtitle on his 2017 book Why Bob Dylan Matters, but that's maybe because his publisher didn't want what I assume was his original title: How Bob Dylan Matters to Classics Students. 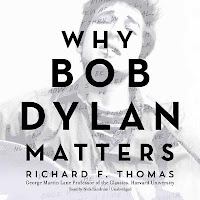 But I jest. This is a terrific addition to both the popular and the scholarly literatures on Dylaniana and Dylanology, and anyone who's been interested in any version of Dylan will find lots to appreciate in Thomas' book.

As much as I've always enjoyed and admired early Dylan, my love for Dylan emphasizes his post-1997 albums, and that's the same for Thomas. (I'd include as well Dylan's 1989 Oh Mercy, but then again, sometimes Oh Mercy means only "Most of the Time" on repeat, but actually Time Out of Mind is often just "Not Dark Yet" on repeat....) These late albums, released since his 55th birthday, are stunning examples of blues, blues-rock, and folk-blues, as long as you can make peace with the vocal delivery.

Not everyone can handle Dylan's voice. I get that.

In Thomas' formulation and assessment, Dylan has spent most of the last twenty years deliberately interweaving into his songs lines from Ovid, Horace, Virgil, and Homer. The book is full of citation, parallel quotations, and explication, and I found Thomas' argument absolutely compelling. "Workingman's Blues #2" clearly has as a key intertext Ovid's Tristia 2.5.2 (in Peter Green's translation for Penguin); "Lonesome Day Blues" borrows key lines from Allen Mandelbaum's translation of Virgil's Aeneid (book 6, line 851-53); and the list goes on, far past what Thomas has space for in this little book.

On the question of Dylan's alleged serial plagiarism, mostly I'm on Thomas' side. In Thomas' definition, plagiarism involves taking someone else's words and/or ideas, without modification, and pretending that they're yours. Dylan, however, takes someone else's words and/or ideas, modifies them intensely even where the changes seem small (such as by dropping them into a context whose own meaning shifts that of the borrowed phrasing), and makes them his. In these internet times, Dylan's borrowings aren't particularly hard to find, so I don't find it credible that he's expecting no one will notice. His work depends, after 1997, on allusiveness and intertextuality and deep cultural echoes: that's not plagiarism, but a genuine contribution to shared culture.
Now, I don't go all the way with Thomas. My Dylan ideology doesn't let me accept Thomas' consistent phrasing about Dylan's post-1997 compositions, recordings, and performances, namely that "this gift was given back," even though Dylan himself used the phrase in a 1997 interview. It's abundantly clear to anyone prepared to listen with a modicum of attentiveness that with 1997's Time Out of Mind, Dylan had entered a different phase as an artist, maybe even a different literary world. But "the gift"? Dylan as chosen one? Come on, man....

Thomas does a wonderful job here of tracking down all kinds of lines from classical literature that turn up in post-1997 Dylan songs, and articulating just what this means for Dylan and for literature. (I would've suspected that many of these gems were turned up by students in his occasional offerings at Harvard of a freshman seminar focused on Dylan and the classics, but there aren't any footnotes to that effect.) He contextualizes this through detailed readings of Dylan's book Chronicles: Vol. 1, as well as tracking and explaining allusions to other writers throughout Dylan's career. As I say, I found Thomas' methods, and most of his conclusions, absolutely compelling.

Why Bob Dylan Matters will change some of the ways that I listen to and understand Dylan, and that's not an experience I've often had: about individual songs, sure, but not about Dylan overall as an artist whose songs I've spent hundreds and hundreds of hours listening to.

This book, in other words, is a Very Big Deal.
Email Post
Labels: american nonfiction review

theresa said…
I will look for this. I am interested in whatever he does, even though some of it is kind of meh. But oh, so much to love. The deep understanding of stories and how much we need them. (Basically all of Desire, Blond on Blond.) One of my sons said, Isn't he the one who sounds like a duck? You either love that voice or you don't, I guess. An old friend (as in: way older than me) couldn't believe I didn't think Dylan deserved the Nobel and it made me listen again to all my favourites. And I still disagree about him receiving a prize for literature. Genius? Yup. Artistry? Yup again. But on the page? Nope. I thought of Edwin Muir's essays about oral literatures and the communal sense of ownership and maybe BD is a sort of natural heir of that tradition. Anyway, I enjoyed this and will put on Desire...
May 12, 2018 at 8:03:00 PM PDT

richard said…
Desire is one of the few Dylan LP records I've held onto, because it's terrific, but you know what? It's been almost completely pushed out of my rotation in favour of Together Through Time and Time Out of Mind.

And I agree with you about the Nobel. There's no other musician I can see getting the prize, and I suspect that there's a healthy Dude Bro component to seeing him as worth the attention even if it's not as much on the page. Still, this book gives some good insight into why the Nobel committee could have been convinced to see his music as literature.
May 13, 2018 at 8:29:00 AM PDT

richard said…
... but it's getting there.