Let's get the "pardon?" elements out of the way immediately, just as the front-cover blurb does it for Cherie Priest's novel Boneshaker: per Scott Westerfeld, it's a "steampunk-zombie-airship adventure." (In other news, I've only just this moment learned who Scott Westerfeld is, beyond a blurber for Boneshaker: I kind of want to be him now, both because he has smart things to say about dumb reviewers and because his kid fans build him amazing stuff.)

So anyway, yeah. Zombies, airships, and full-on steampunk. None of these are things I've managed to bump into very often, even if I've been cheerfully without genre allegiances for some time here at Book Addiction Central, but I'm glad to have made a fuller acquaintance with them. 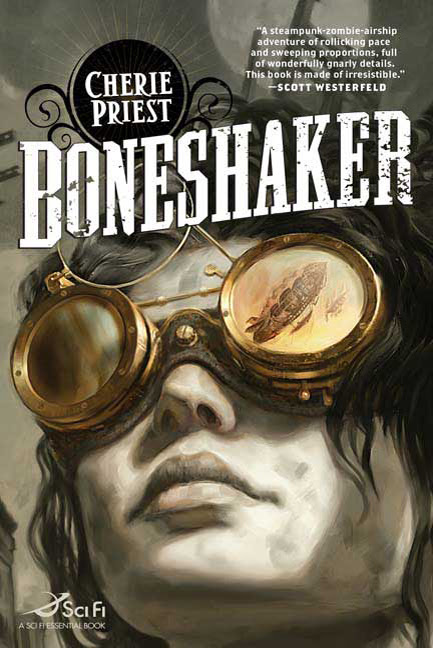 The basic set-up is that deep in the 19th century, Seattle was the location of an apparently failed attempt to build a steam-drive device that'd allow mining for gold underneath glaciers. This failure's key feature was that in demonstrating beneath Seattle the machine's potential for gold-mining, the device struck an underground deposit of gas: Blight Gas, which turns anyone breathing it into a zombie. Downtown Seattle is immediately walled off, and its inhabitants either become zombies, are eaten by zombies, or live with zombies constantly pursuing them.

Into this comes a young man who'd like to remedy the reputation of his father, whose machine caused this whole mess, and his young mother, who just wants to get him the hell out of zombified Seattle. Will good win out? And who's good, anyway -- for that matter, what IS "good"?

It's a fun and complicated novel: characters both just as believable as in any other fiction and the uniquely steampunkly absurd (the traditionally over-the-top Victorianish names, like "Leviticus Blue" or "Jeremiah Swakhammer," or an airship captain who's 7'6" tall); settings both realistically detailed and deliberately altered for novelistic purposes; lots of good stuff. It's really successful escapist fiction, in other words, portraying a world that's both different from ours and much darker. The US Civil War has been going on for 18 years, for example, and there's little apparent cause for hope in really any aspect of the represented society. Yay us, because this ain't our world, but we're able -- well, Cherie Priest is able -- to build us a world like Boneshaker's world simply to entertain us.

Mind you, Chris Harman might suggest otherwise. I don't know whether Priest is familiar with his book Zombie Capitalism: Global Crisis and the Relevance of Marx (reviewed in the Socialist Review), but for me, the term "zombie capitalism" immediately leapt to mind when I realized in Boneshaker, zombies are a natural product of the mining industry. The non-zombie characters outside Seattle are, mostly, the functionaries of a technology-driven, dehumanizingly industrial process -- the non-zombie characters inside Seattle are, mostly, self-directed technology-supported resisters of the dominant social order -- the zombies can't help themselves, must be destroyed, and should be pitied rather than just loathed. I don't have time to generate much more than this, but Boneshaker just might have the potential for a revolutionary post- or anti-capitalist ecopolitics.

That, plus it's good escapist fun. Not high-end steampunk, I gather, but fun.

In conclusion, I'm totally going to build me a doppelganger out of corpses, with brass gears and mahogany dials and steamdriven appendages and whatnot, so I can read all this fascinatingly political steampunk stuff that I'm suddenly realizing is out there: like this, or this, or this. (Stupid academic career trajectory.)

I've added a few minor cavils in a vain attempt to satisfy some emailed comments, which suggested my praise of Priest's novel ought to be a little bit tempered until I've read enough steampunk to be more knowledgeable. Fair enough, it seems to me, though I didn't change much.

Quit reading half-decent, half-baked SF, and then praising it conscientiously. Boneshaker is fine, I guess, but no better than fine. It's derivative, it's simplistic, and it's not even all that well-written.

I'm not even all that sure about fine any more.

Analogy? You're a scholar of classical music. You've delved into jazz a bit, and discovered there's some significant value to it, some theory, some history, some scholarship. You've heard Miles Davis, Charles Mingus, you've scratched your head over Third Stream music. But this book is Adult Contemporary Smooth Jazz, man, this is David Sanborn. It's so great of you to cross over and do genre. But this book? Really? Can't do it. It's just not that good.

richard said…
Agreed mostly, I think: but if I read something, I'm generally going to read it conscientiously. Or are you saying I need to be less conscientious with books in fictional modes I don't know well enough?

The key takeaway for me is exactly what I expected it to be, namely that there's some really cool stuff happening in steampunk (just as there is, I assume, in most strands of genre fiction). Boneshaker was a useful start, because it's local and because it's popular (apparently) and because it happens to deal with some of the themes or subjects I'm looking to see dealt with by works on my Real Reading List.

But yeah, Boneshaker strikes me as one option among many, fashionable rather than essential.

Anonymous said…
Have you read Warren Ellis's FreakAngels? All free online or available for a reasonable price in print.

Anonymous said…
I know what you mean: though I read only half of OaC. Why, why?

At least FAs has very beautiful art, and an OK story. Very glad you are liking it.